From Hitchcock to The Hunger Games: A history of Babelsberg Film Studios

Lying just outside Berlin, Babelsberg Studio is the world’s oldest large-scale film studio, and today is one of the biggest in Europe. For over 110 years, directors, producers and actors have come together at Babelsberg to create many of the films and TV series we know and love. Discover more about Babelsberg Studio through this guide to its fascinating history.

The origins of Babelsberg Studio date all the way back to 1911 when film production company Deutsche Bioscope bought the site where the studio lies today. Construction soon got underway and the first of many state-of-the art film studios was completed within one year.

With limited electricity at the time, the first studio built on the Babelsberg site was a glass-house stage. With a glass roof and walls, filmmakers were able to take advantage of natural light during film shoots.

As early as February 1912, cameras began rolling at Babelsberg for The Dance of Death (Der Totentanz) by Danish director Urban Gad, the first of thousands of films to be produced at the site.

The birth of German Expressionism 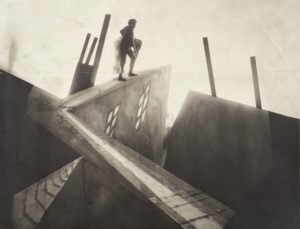 With a backdrop of rising political unrest, Babelsberg Studios would become a breeding ground for one of the most important cinematic movements of the 20th century: German Expressionism.

Following the artistic tradition, German expressionist film sought to deal with the feelings of anxiety and distrust that gripped German society in the aftermath of World War I. It was characterised by its dark, character-driven narratives that rejected the previously dominant idea that cinema was simply made to delight audiences. Instead, German Expressionism depicted a wildly distorted reality that was designed to convey the inner experience and emotions of its protagonists.

Many films now widely viewed as some of the most important and influential of the German expressionist movement were filmed at Babelsberg Studio, including The Cabinet of Dr. Caligari (Das Cabinet des Dr. Caligari), Destiny (Der müde Tod) and Metropolis.

While the highly exaggerated aesthetic of German expressionist cinema would be short-lived, the impact of the movement upon wider cinema can still be seen in film and TV today.

Hitchcock even said later when reflecting upon his time in Germany that: “Everything I had to know about filmmaking, I learned in Babelsberg.” As German Expressionism continued to grow in popularity in Germany, the film studio continued to expand. In 1926, under the leadership of new owners Ufa, a large new studio was built. Known today as Marlene-Dietrich-Halle (named after film star Marlene Dietrich), this new studio would become home to the production of Babelsberg’s first feature-length film: Fritz Lang’s Metropolis.

Metropolis is a German expressionist science-fiction drama set in a dystopian urban future. At the time, it caught critics’ attention for its stunning visuals but was criticised for its narrative, even being described by War of The Worlds author H.G. Wells as “silly”.

Yet all publicity is good publicity and the discussion around Metropolis brought Babelsberg Studio great acclaim within the film industry, helping to establish it as one of the world’s most important film studios of the era.

Despite criticism at the time, Metropolis is widely deemed today as a masterpiece: a pioneer of the science-fiction genre that is cited as one of the most influential films of all time.

As technology continued to progress and synching sound with image became possible, the first sound stage in Europe was built on the Babelsberg Studio site in 1929. Named the Tonkreuz, filmmakers working at Babelsberg began to create full-sound films.

The first of these came in 1929 as Melodie des Herzens (Melody of the Heart) starring Willy Fritsch, which was later followed by Der blaue Engel (The Blue Angel) starring Marlene Dietrich and Emil Jannings in April 1930.

With the development of the Tonkreuz, Babelsberg Film Studio soon gathered a strong reputation for music and revue films. Films such as as Der Kongreß Tanz (Congress Dances), La Habanera and Die Frau meiner Träume (The Woman of My Dreams) would continue this reputation all the way into the 1940s.

Babelsberg Studio during the Third Reich

When the Nazi party came to power in 1933, Babelsberg Film Studio was transformed into a propaganda machine. Under the leadership of Adolf Hitler’s propaganda chief Joseph Goebbels, hundreds of propaganda films were created, many of them highly antisemitic in form and nature.

Hitler’s rule and its impact on the film industry pushed many of the era’s brightest stars — including Marlene Dietrich — to escape censorship and move to the USA to pursue a career in Hollywood.

Babelsberg Studio and the wider German film industry continued to operate throughout the Nazi’s time in power. With Goebbel’s decree that entertainment was part of the war effort, propaganda films continued to be produced all the way up until Hitler’s defeat in 1945. Once the studio lot was passed over into the hands of the Allies, post-war film production started as early as 4th May 1946 with Wolfgang Staudte’s Die Mörder sind unter uns (The Murderers are Among Us) starring Hildegard Knef.

Die Mörder sind unter uns was the first film of the Trümmerfilm style, which depicted the impact of war within Germany and other countries at the centre of the conflict. The style was characterised by its use of outdoor locations, displaying the damage done to German infrastructure clear for all to see.

When Germany was divided between East and West to become two nations, Babelsberg became the only film studio for feature-film production in East Germany. Between 1946 and 1990, 1200 feature films and TV programmes were produced at Babelsberg, including one Academy-nominated film Jakob der Lügner (Jacob the Liar). Since the reunification of Germany, Babelsberg Film Studio continues to be recognised as one of the most important film studios globally, remaining the largest operating film studio in Europe.

In the past 10 years, a myriad of international productions — from Grand Budapest Hotel to The Hunger Games: Mockingjay Part 2 — have bought some of the biggest names in film to Babelsberg Film Studio, including Quentin Tarantino, Wes Anderson, Tilda Swinton, Matt Damon, George Clooney and Cate Blanchett to name but a few.

Babelsberg Studio is also home to a number of recent TV series, including Netflix’s Dark and German-language hit Babylon Berlin.

So, there you have it: all the history you need to know about Germany’s biggest film studio just outside Berlin.

Want to become part of a rich history of Filmmaking in Berlin? Find out more about our new BA (Hons) Filmmaking Course and attend an Open Day! Want to speak to someone about submitting an application? Our Admissions Team is here to support you. Reach out to them via email [email protected] or give them a call at +49 (0) 174 278391.

Welcome to our brand-new Screen and Film Faculty: filmmaking is alive in Berlin

8 Berlin cinemas not to be missed